This week has been crazy for a lot of clubs, and I know that my club members have dreaded Homecoming. It has been crazy but the best times were when we all had fun laughing while we were working together as a team. That was what I believe was most important to DMC, is the fact that we can come together as one. Homecoming was one of our goals to accomplish and it is nearly done, but I think that we all did good. It really did bring us all together because we as a club started to think about the what, how, and why of DMC. We influenced this a lot through the workings of the homecoming events. For example we tried to send a message through the medicine show and as well as the float. We paired up with Newman and both of us showed why our club exists. We not only incorporated our clubs meanings in the homecoming events but we connected as a family. When one of us were not there we would remind them and make sure they made it to one of the meetings/events. Which I thought was cool because I really did not see that at the beginning of the school year.

Team building is what brings our members together and because of that we have decided that it is time to select a new set of board members. The progress that we have made so far on the elections is the confirmations the candidates have sent to the secretary. Next week we plan on having newly elected positions. We all decided that freshman/sophomores should feel free to run because majority of the members will be graduating in May. It makes sense to hand the stick to younger people so they could understand how to run certain positions. And we will re-new our constitution because it needs a lot of things changed to it.

After Homecoming is over we will start to plan out the International Potluck that we hold annually. It will be at the Sacred Heart Church on November 16th. This is going to be exciting for us because hopefully it will turn out good for us and the community. We decided to have a Middle Eastern Cultural Theme to it because we have not celebrated this culture yet. And we are excited for it because it is new and hopefully we pull some different Nationalities out into the community. We usually have donations from local restaurants in Alamosa and these are Calvillo’s, Juanito’s, May-wah, etc. Charging for profit has not been completely decided but it has come up. We are planning out how the publication of the event will be like as well.

On the side not, we have accomplished the Indian Taco sale that we funded and made over 1,000 dollars which is nice. Another thing we want to be involved in is Circle K’s trick or feed because we think it is a neat opportunity. One of the personal goals that I set for the club is to know the what, why and how of DMC and so far it is going good. I also am going to run for Vice-President for DMC, not president because I want to learn the ropes. And I want to finish this class with more knowledge of being a leader/event planner. Although it was a surprise that our President resigned, it made us realized we did need new people. As a club I believe that we have done a lot throughout the past few months and that’s good. There are not major challenges I believe so far with DMC.

The night of the bonfire and tailgate, is when everyone realized how much colder it is getting in Alamosa. That night was cold and the fire was not going so everyone was freezing. When I first went to the Bonfire, the only energy I could get from was the MC’s. The crowd didn’t seem like they wanted to be there and I felt that it was bleh. The pep rally was okay but the crowd is never going to cheer. I sort of felt bad for the people that were just there because they needed numbers or their clubs. The food was good though but GAB should have another Hot Coco stand like last time. Another thing that seemed to make the Bonfire/Tailgate boring was the fact that the teams seemed to talk forever about things we didn’t care about. We should have activities that people could be involved with or even just have a little dance. I think that most of the people didn’t dress for the weather and that was their fault. But I really think that there should have been hot beverages, music, and games. It would have been fun to have more people be excited for homecoming but I’m not sure how we could change that.

Some of the things that I would have made some changes would probably remind people that it will be cold at the Bonfire. And that introductions should be kept short for the athletes so they wouldn’t bore the crowd. Maybe the pep rally people should have done some cheers that involved the crowd to get hyped for the game. Because people were still half naked, it would probably be a good idea to have hot beverages. The games could have been things like root beer pong, dance battles, etc. I am just throwing this idea out there to but maybe the clubs should have like a cheer off at the Bonfire and there could be more points. Something that could get people to participate in would be very good.

The hotdog eating contest was pretty interesting and I did not participate in the challenge but I spoke to the people who did. It was very cold that night at the Bonfire but after the fire started to get bigger, people warmed up. I felt that the hotdog eating challenge should have had the contestants face the crowd so we could see the people. The sitting arrangements should have been facing the crowd because you would have involved the crowd. And the hotdogs should have been warm. It was fun never the less though.

What I really liked was the glow in the dark zipline, I participated in that and it was fun! I don’t think I had much of a problem with it because everyone had fun doing that activity. I had fun because of the energy at the Challenge Course. You could sense the fear, excitement, and adrenaline the climbers felt. It was cool to be there because most of the participates were peer pressured into going with their friends on the ziplines although they feared heights. But then again I always love going on the challenge course because it strengthens people’s weaknesses, bonds, and friendship. 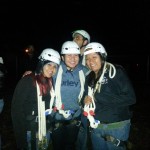